A paraglider from TUSUR took part in the World Cup 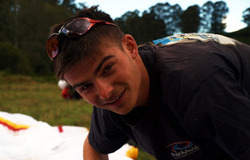 Ivan Kravtsov, leader of the TUSUR paragliding club «Podnebesye» (Under the sky) and member of the Russian national team, has recently returned from World Cup stage in Brazil. 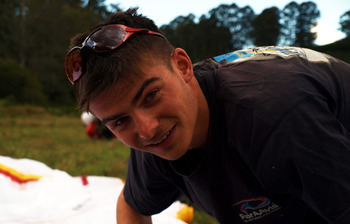 Ivan Kravtsov, leader of the TUSUR paragliding club «Podnebesye» (Under the sky) and member of the Russian national team, has recently returned from World Cup stage in Brazil.

Ivan Kravtsov and Alexey Makovenko, Tomsk pilots and members of the Russian national team, participated in the competition that took place in early April in the resort town of Pocos de Caldas. South American stage of the World Cup was a very meaningful event for all paragliders, therefore it gathered about 130 best pilots from all over the world.

However, strong wind and heavy rain made the weather conditions unfavourable for paragliding. That is why the competition was reduced to two days instead of seven. As a result, Ivan Kravtsov was 88th in the ranking and Aleksey Makovenko -122nd.

— As a matter of fact, the stage was reduced to a single day; that is why results were not as good as expected. — Ivan says. — However, participation in the World Cup is in itself an enormous experience. It was our first time at a competition of such level and the first time we competed with the best pilots on the planet. So my impressions are absolutely positive.

In May Ivan Kravtsov is going to visit the Austrian Alps in order to participate in the Championship of Europe as a member of the Russian national team.

According to Ivan, world-class competitions differ significantly from the Russian domestic ones: speed, dynamics and tactics differ a lot. To perform well there, one needs to participate in the World Cup regularly and keep fit.

Paragliders usually raise money for their trips on their own or resort to sponsors. For instance, the trip to Brazil was sponsored by TUSUR, ROSTO (Russian Defence Sports and Technical Organization), Russian United Federation of Superlight Aviation and «EleSy».