TUSUR brought together the representatives of universities, industry and government for the round table discussion of the Triple Helix innovative development model in the Russian context. 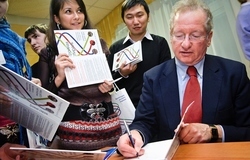 Round table discussion “Interaction of universities, industry and government to establish Innovation Centers in Russia” took place in the conference hall of the Tomsk Regional Administration on November 29. It was part of the visit of Stanford University professor Henry Etzkowitz to Russia, organised by the TUSUR Institute of Innovation. 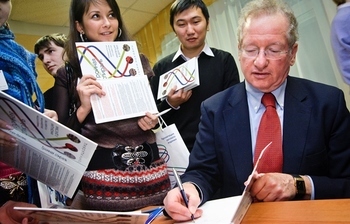 Round table discussion “Interaction of universities, industry and government to establish Innovation Centers in Russia” took place in the conference hall of the Tomsk Regional Administration on November 29. It was part of the visit of Stanford University professor Henry Etzkowitz to Russia, organised by the TUSUR Institute of Innovation.

The list of prominent speakers at the conference included Governor of the Tomsk Region Viktor Kress, First Deputy Governor Oksana Kozlovskaya, TUSUR Rector Yury Shurygin, General Director of EleSy Sergey Chirikov, Director of the TUSUR Institute of Innovation Alexander Uvarov, and head of division at the Institute of World Economy and International Relations of the Russian Academy of Sciences Irina Dezhina. Organizers of the round table invited Alyona Popova, Russian e-Government expert in charge of Duma 2.0 project, to moderate the discussion.

More than 350 people attended in the conference, including representatives of Tomsk universities and research institutes of the Tomsk Scientific Center (Siberian Branch of the Russian Academy of Sciences), executives of innovative companies and heads of relevant departments and committees of regional and municipal governments. Representatives of Novosibirsk science campus and Kemerovo universities also came to Tomsk in order to participate in this high-level forum.

Governor of the Tomsk region Viktor Kress started by emphasizing: “Here, in the Tomsk region, we witness a functioning triple helix, as Tomsk universities, industry and government have long ago reached consensus with regards to the need to form regional economy based on innovations”. In his speech Governor stated preconditions that had enabled Tomsk to become a city of innovation. Firstly, lion's share of profits from oil and gas production was taken away by Moscow. Secondly, a unique innovation system was formed in Tomsk relying on universities and research institutes.

According to Governor, scientific and educational complex is the third largest sector in the regional economy. Viktor Kress noted that Tomsk region had initiated adoption of new federal laws, entitling universities to start their own small enterprises. He also stated that Tomsk region started putting into operation “INO Tomsk 2020” project (INO stands for Innovation, Science, Education), aimed at accomplishing four major tasks. First, develop Scientific and Educational Center on the basis of universities. Second, develop innovative infrastructure, primarily the Special Economic Zone. Third, provide financial support to foster innovative environment. Four, encourage small business development. Governor noted that by 2015 implementation of the project was expected to increase the share of foreign students at Tomsk universities, as well as share of innovation-oriented enterprises in the region.

In his address at the round table Professor Henry Etzkowitz noted that study of interaction between universities and industry in Mexico had helped to shed light on the role played by government in the triple helix model. Government plays a leading role in industrial economy, while in knowledge-based economy this leadership is taken up by universities, as they are the most efficient institutes of knowledge generation and dissemination. Nowadays universities, government and industry tend to take each other’s functions upon themselves. Universities create business incubators, government provides financial support to new companies etc. It is necessary to ensure equilibrium among triple helix components in order to maintain competitiveness of innovative economy. In the USA a sustainable model of three overlapping spaces – industry, government and universities – has been created. As a result all three institutions acquired enhanced functionality. Henry Etzkowitz noted that the model chosen for the innovation city in Skolkovo was the best because it was centered around a university. Modern universities have acquired a new mission, namely generation of spin-off companies. In the USA this mission became crucial when universities could not manage requests generated by private companies anymore. At first the so-called double helices were formed between universities and industry, between industry and government etc., later on they were combined into a triple helix. Nowadays triple helix can be seen as an aggregate of individuals. People might move from universities to industry, from industry to the governmental sector and so on, transferring accumulated experience and strengthening cooperation of institutions. A striking example of such dynamics is MIT, which used to be just a small engineering school until university rector made a decision to invite representatives of real business and professional engineers to teach there. As a result professors started introducing real-life cases and tasks into the learning process. Professor Etzkowitz noted that he was working on a new special model for the university in the triple helix – Novum Trivium, where education relies on three essential components: traditional disciplines, innovations and entrepreneurship, foreign languages and cultural competences. This approach allows avoiding an excessively narrow specialization of students, while training them to create international companies in any business area. In conclusion Henry Etzkowitz invited all participants to the IX Triple Helix Conference in Stanford.

According to one of keynote speakers Oksana Kozlovskaya, the most important issue for Russia today is lack of understanding and dialogue between universities, industry and government. “The key factor which determines success of the Silicon Valley is the handshake, i.e. trust and mutual understanding between people”, says First Deputy Governor. Discussing innovative development of the Tomsk region in the context of the triple helix model, she noted that five years ago elaboration of the regional development strategy had been aimed at identifying world economic and development trends and the future orientation of world economy and evaluating our own potential in this context. According to Oksana Koslovskaya, triple helix model successfully functions in the region. Moreover, this model is the backbone of development. Cooperation of universities, industry and government creates favorable conditions for innovative environment. “At some point we managed to identify the motion vector and the time has proved we had chosen the right way. As a result we are among leaders of regional development. All these facts demonstrate that our government is competent. We have advanced business, i.e. enterprises which turned into world-class companies within twenty years. Our science has evolved on the basis of university complex and our most successful enterprises were established by former junior and senior researchers of the universities who became successful managers”, Oksana Kozlovskaya notes. First Deputy Governor also suggested holding the next Triple Helix Conference in Tomsk.

As TUSUR rector Yury Shurygin emphasised in his speech, TUSUR was already implementing the triple helix model. Ten years ago the university started forming its educational, scientific and innovative complex, i.e. small science-intensive companies with TUSUR alumni in charge. By now 120 such companies have been created, 19 more were established in accordance with federal law 217. Yury Shurygin noted that based on agreements between the university and science-intensive firms, partner companies establish their laboratories and research institutes as structural divisions of the university, fund research and development, carried out by undergraduate and postgraduate students. TUSUR has developed a partnership mechanism when alumni of the university settle overseas, establish their own science-intensive companies and then commission TUSUR research and development. This partnership mechanism was for the first time subject to the real-life test in the course of TUSUR cooperation with the Silicon Valley companies. At present TUSUR is negotiating principles of partnership with European and Taiwanese companies. Rector noted that in 2004 TUSUR was the first Russian university to create a student business incubator. By now more than 20 start-ups have been released by this incubator. With regards to interaction of the university with governmental agencies Yury Shurygin emphasized that TUSUR and Tomsk Regional Administration had started their partnership relations by launching a joint program in the field of electronics. As a result, a hi-tech LED enterprise was established in the Tomsk Special Economic Zone.

Answering the question about possibility of implementing the triple helix model in Tomsk, Chairman of EleSy board of directors Sergey Chirikov said that partnership between universities, industry and government was still in the making. Large commercial companies of the region emerged during the 1990-s when business became the only possible way out for representatives of science and universities, where financial support was rather scarce. Business was not then provided proper support and it was not so long ago that its cooperation with government, universities and representatives of scientific community was established. According to Sergey Chirikov, business cannot function when legal basis is unstable and when new amendments are frequently adopted and have to be taken into account. Isolated intellectual markets also constitute a problem. Products of Russian companies are deemed unreliable and therefore are not in demand in the international market, while young innovative companies desperately need orders to survive.

Irina Dezhina, head of division at the Institute of World Economy and International Relations of the Russian Academy of Sciences, noted in her speech that the triple helix model had been conceived as a result of research of existing practice and that is why it proved to be applicable. As for dissemination of the Silicon Valley experience or other similar success stories, we must consider the fact that such experiences cannot be transferred to another country without prior adaptation. Russia is a country with strong state regulation; therefore, it needs to develop lateral connections between regional government, industry and universities, and an intermediary institution ought to be created to facilitate such interaction. Irina Dezhina underlined that in this situation borrowing foreign practices could be less relevant, than studying and disseminating domestic experience.

Alexander Uvarov, TUSUR Vice-Rector for Innovative Development and International Affairs, was the one who initiated discussion of the triple helix innovative development model in Russia. In his address he noted that there were plenty of obstacles to overcome in order to ensure efficient interaction between universities and industry, and he became interested in the triple helix model because it offered various solutions to those problems. According to the model, university has to become entrepreneurial in order to be successful in the economy based on innovations. A distinctive feature of an entrepreneurial university is a large research budget and critical mass of intellectual property. Industry in its turn has to contribute to development of innovation clusters in the region and possess expressed corporate culture. Universities would expect authorities to contribute to the development of private and intellectual property institutions, as well as data protection rights. In conclusion Vice-Rector indicated that expert community should be commissioned to conduct foresight analysis in order to identify priority directions for development.

Summarizing the discussion, Oksana Kozlovskaya noted that the more politicians, entrepreneurs and rectors read the book about the triple helix model, the more evident the need for cooperation became. It is impossible to move forward, if three major forces cannot find consensus. Nowadays government defines rules of the game, their duration and transparency. According to First Deputy Governor, if implementation of the triple helix model is our common objective and everyone tries to implement it and prove its validity, then people in the Russian Government, Presidential Administration, and large companies will understand the need for consensus and cooperation. Oksana Kozlovskaya pointed to the example of Perm region – the industrial area which embarked on the task to accomplish the “cultural revolution”. She noted that Tomsk region with its focus on innovation ought to generate unique knowledge which would enable us to offer a different perspective on development and find answers to questions that all participants of the innovation process face today.