TUSUR hosted the Russian qualification of The Freescale Cup 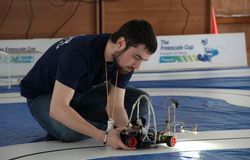 The Freescale Cup is an annual tournament for students studying software development, electronics and robotics. This year a total of 12 teams from Tomsk and other cities of Russia and Ukraine came to TUSUR to find out whose autonomous model race car is the fastest. 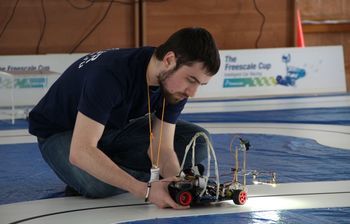 The Freescale Cup is an annual tournament for students studying software development, electronics and robotics. This year a total of 12 teams from Tomsk and other cities of Russia and Ukraine came to TUSUR to find out whose autonomous model race car is the fastest.

The Freescale Cup competition has a history of holding its Russian qualification in Tomsk, initiated by the TUSUR Institute of Innovations. Same as last year, this year’s winners will be representing our country at the European Final. The qualification event was organized by the 2I Laboratory of Robotics and AI. The competition was officially opened by representatives of Freescale and the Vice-Rector for Innovative Development and International Affairs Alexander Uvarov.

“Our team was not formed until late 2013, when we were invited to come to Tomsk to compete in the Freescale Cup. We started actual preparations to the Cup only several weeks ago. We are extremely grateful to the organizers for this interesting experience. We will definitely keep developing robotics in our university”, says Alexander.

To support the competition in Tomsk, representatives of Freescale Flavio Stiffan and Ivan Skalka. The guests noted both the high-quality organization of the event, and the great number of young people who are very enthusiastic about robotics modeling, electronics and software development. Freescale Semiconductor is one of the top-10 global manufacturers of micro controllers and processors. The company offers the opportunity to receive a Master’s degree abroad for students studying the Freescale technology.

This year the organizers have decided to skip the qualification stage, right to the final race, thus giving the teams more time to prepare. The final race followed the standard pattern: each team had three attempts to demonstrate the performance of its vehicle. Only four teams would quality to compete in the European Freescale Cup in Erlangen, Germany. The winners of the qualification are: the team of the Odessa Polytechnic Univeristy (Odessa), Time machine of the Tomsk Polytechnic University (Tomsk), Mashine gun of the Novgorod State University (Veliky Novgorod) and Turbo turtles of TUSUR, representing the Department of Computer Control and Design Systems and Department of Electronic Systems (Tomsk). Both of the qualifying Tomsk teams work with robotics in Elesy.

Evgeny Shandarov, head of 2I Laboratory of Robotics and AI and organizer of the Russian qualifications, says that it is the efforts of the Institute of Innovations of TUSUR that made it possible for Russia to join the Freescale Cup framework.

“Our job is not only to organize the event, we invest tremendous effort in attracting participants, we communicate with university representatives, team leaders and students. The level and scale of the event grows year after year, as does the number of universities, teams and students who would like to participate. And we find it very fulfilling to be developing the Freescale technology in Russia”, says Prof. Shandarov.

Freescale and TUSUR have entered the arrangement to offer to TUSUR students internships in the European offices of the company and to open specialized Freescale-based microprocessor technology laboratories.