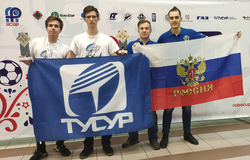 The team of TUSUR University became a Rescue Simulation winner at the 2019 RoboCup Asia-Pacific. 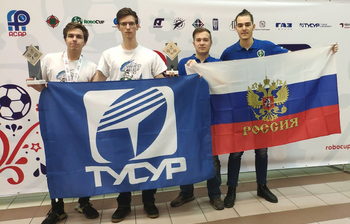 The team of TUSUR University became a Rescue Simulation winner at the 2019 RoboCup Asia-Pacific.

Two TUSUR teams competed in the Rescue Simulation league: Victoria (first place) and Alpha (third place), being the only two teams representing Russia in the league competing against teams from Iran, Singapore, China, Japan, and Taiwan. In addition, Alpha won the first place in the CoSpace superteam challenge as a member of a composite team with Singaporean players. The league is usually dominated by teams from the Asia-Pacific region, which makes this success of TUSUR students particularly notable.

Teams competing in the league are tasked with creating multi-purpose software that is equally usable both for virtual and hardware robot. All testing and programming must be down during the event, and the resulting software must allow virtual robots to perform a set of tasks, and hardware robots, to perform in a competition mode.

The Rescue Simulation (CoSpace) league was included in the list of RoboCup events in 2017. Last year, the TUSUR team /dev/null was named winner in the CoSpace league at the Super Regional RoboСup Asia-Pacific.

The competition brought together a total of more than 1,000 participants from 24 countries. The 2020 RoboCup Asia-Pacific will be held in Aichi, Japan, next October.